Bundi is not hounded by tourists in the same manner as some of the more famous Rajasthan cities. This is the reason why many people in search of a peaceful yet exciting vacation opt for Bundi. Situated in the southern part of the colourful state Rajasthan, Bundi is 39 km north west of Kota. It is easy for tourists to explore this typical Rajasthani city and its history within a very short span of time on either a taxi or auto rickshaw or simply a cycle. 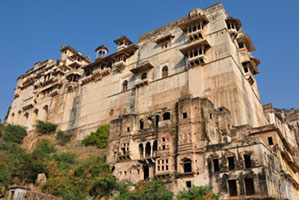 This is one of the most impressive and in days passed by, impregnable forts in Rajasthan. It has four enormous water reservoirs which were built to cater to the water requirements of the fort. The panoramic view of Bundi and surrounding hills is magnificent, an ideal place to sit quietly and watch the sunset. Taragarh means the 'Star Fort' is the most impressive of the city's structures. It was constructed in AD 1354 upon a steep hillside. The largest of its battlements is the 16th century bastion known as the Bhim Burj, on which was once mounted a particularly large cannon called Garbh Gunjam, or 'Thunder from the Womb'. The fort is a popular tourist viewpoint of the city below. The fort has three tanks which never dry up. These tanks are right on top of the fort which sits on top of one of the hills surrounding the city. Since the technique is lost but the tanks still survive as a testament to the advanced methods of construction and engineering in medieval India. 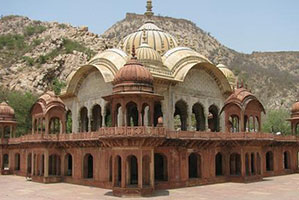 This final resting place of Bundi's kings and queens, Ksharbagh is another fine example of Bundi's impressive architecture. The cenotaphs are beautifully crafted from fine yellow sandstone and marble.

Eighty for pillared cenotaph:
An amazingly magnificent with 84 pillars in as single cenotaph along with Shiva lingam it was erected by rao Anirudha singh 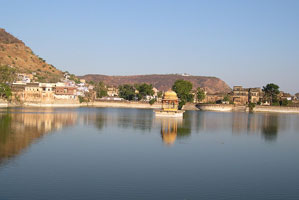 Set in the heart of the town, Nawal Sagar Lake is a major tourist attraction of Bundi. The lake is all around surrounded by different baoris. This artificial lake has a famous temple at the center. The temple is dedicated to Lord Varuna and it holds immense religious significance. People from all over visit the temple to seek the blessings of Lord Varuna. 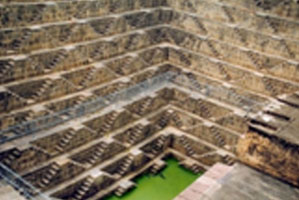 Bundi is renowned for its baoris or stepwells. There are 50 step wells in Bundi out of which only few have been maintained till date. Most prominent among these are the Raniji ki Baori, Nagar Sagar Kund and Nawal Sagar. The first one was built by Rani Nathavatji and is known for its exquisite carvings. The stepwell was built in the year 1699 and is 46 metre deep. The second one is a pair of identical stepwells close to the Queen's step well while the Nawal Sagar is close to the palace containing many small islets. There is also a temple dedicated to Lord Varuna, half submerged in the water of the lake. This temple can be reached only by a boat. 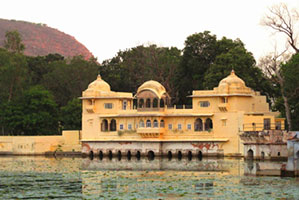 Having a class of its own, the Sukh Mahal was built during the era of Umed Singh. The main objective behind building this mahal was to provide a facility of free hand activities to the princess. The Mahal allowed the activities free from the control of Rao. Hence, the particular palace makes you aware of the tradition during that era.

How to Reach Bundi